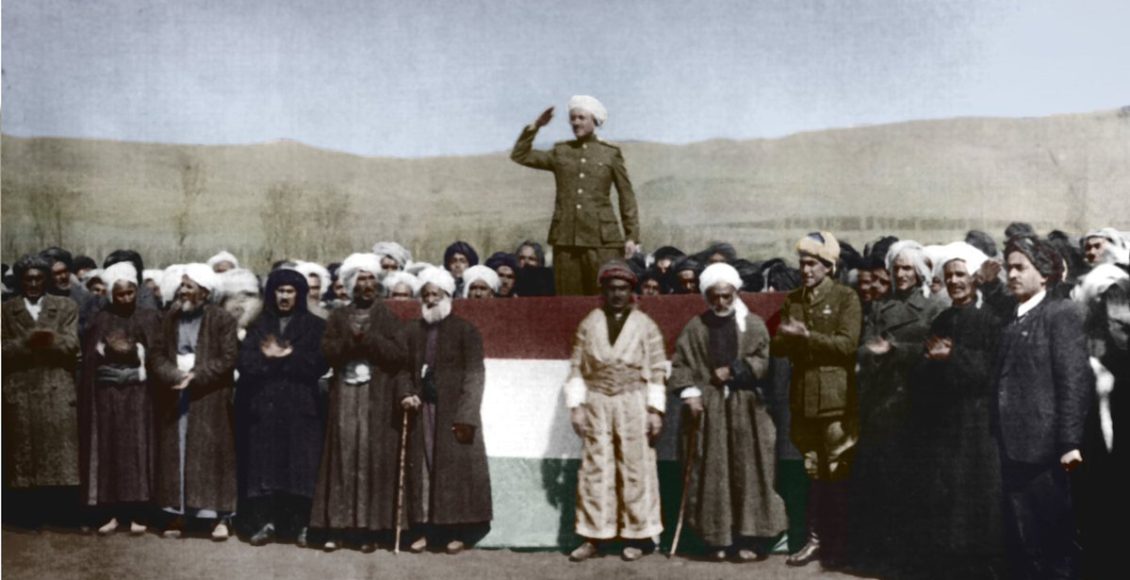 By KCS Editorial Board

The death of a Kurdish woman, Jina (Mehsa) Amini galvanized the diverse ethno-religious groups across Iran towards an uprising that has reverberated across the globe. Jina’s death at the hands of the Iranian morality police highlighted not only the plight of women as second-class citizens across Iran, but also the deeply oppressed and persecuted nature of the reality of minorities across the country.

The Kurdish slogan of “Jin, Jiyan, Azadi” (Women, Life, Freedom), which was first heard across the other Kurdish revolution in Western Kurdistan, known as Rojava, was transported across the Kurdish towns and cities of Iran and into the predominantly Persian cities. Though the slogan originated through the decades long and ongoing struggles of the Kurds in Rojava and Bakur (occupied Northern Kurdistan in Turkey), the struggle for gender equality on par with national liberation has always been a prominent aspect of Kurdish struggles for freedom. Today, marks the 77th anniversary of the Kurdistan Republic of Mahabad (officially Kurdistan Republic, Kurdish: Komara Kurdistan), also known as People’s Republic of Mahabad, officially established in northwestern Iran on the 22nd of January 1946. The Republic was led by the renowned Kurdish figure Qazi Muhammad (1900 – 1947), who would tragically lose his life for the very same state.

The Republic was tragically short lived and lasted 11 months. Mahabad city served as its capital while surrounding cities of Bukan, Piranshar, Naghdeh and Oshnavieh were also included. While this 11 months may seem meager, in light of the onslaught of more powerful and established global and regional powers working to dismantle the Republic, the effort to maintain the state was heroic and indeed a reflection of the profound commitment to freedom that the Kurdish state represented. Consequently, its legacy of struggle for national liberation, of a deep and unwavering commitment to democratic co-existence, and of women’s freedom has endured well beyond its demise. There are a number of lessons that the Republic can teach us all about nationalist struggles, especially for the current crises facing the various oppressed minorities across Iran, the Middle East, and globally.

The first is that without women’s explicit involvement in the revolution as leaders, co-organizers, founders of institutions and organizations, ideologues, and theorists – no nationalist struggle can succeed. The success of the Republic was heavily reliant on the numerous women who were encouraged to enter the political and public domain from the traditional confines of the private sphere. To be sure, Kurdish women have always retained a higher level of freedom than many of their counterparts across the region. Yet, centuries of Islamisation and oppression, specifically in the form of gender based violence by the oppressive nations they co-existed with, ensure that women were increasingly pushed back into the margins.

Yet, the Republic’s most prominent and enduring legacies was that of pushing for the education and empowerment of women. For the first time, women and girls were sent to schools and educational institutions were built explicitly with the goal of teaching them. Furthermore, of the 23 prominent figures within the Republic who gave speeches in celebration of the newly established state, two were women. According to the scholar Shahrzad Mojab, in her article Women and Nationalism in the Kurdish Republic of 1946, the Republic of Mahabad:

“Can be distinguished from its pre-modern predecessors not only by its republican form, which was administered by a political party and a cabinet, but also by its modern educational system, modern media, national army, tax system, national anthem, national flag, national language, and mobilization of women into educational, cultural and political life.”

She concludes that despite the inclusive attempts by the Republic, Kurdish politics has and still remains a gendered and thoroughly masculine practice. This may be seen in the fact that the cabinet chosen by Qazi Mohammad was entirely male. Yet, considering the fact the Qazi Mohammad was a religious man, the promotion and emphasis on gender liberation has endured and remains a primary motivation for modern day Kurds across the four regions of Kurdistan to varying degrees. In contrast, the Shaikh Mahmud uprising against the British Mandate in Southern Kurdistan (Basur) in the late 1910-1920s, remained exclusively feudal and tribal in nature with no changes in the status or role of women within society. This highlights the Republic’s progressive and gender focused position and its legacy, which is reflected today both across Rojava’s Revolution as well as the current ‘Jina’ revolution in Kurdish parts of Iran. Indeed, to contest the patriarchal nature of Kurdish society, Qazi Mohammad appointed his wife as the leader of the Women’s union Democratic Women’s Union of Eastern Kurdistan, established in 1946. This was a powerful message to a society that remained largely rural, feudal, illiterate and impoverished as a result of the Pahlavi regime’s policies.

Notably, the founders of the Union were executed on March 31, 1947, but the organization continued to operate until the 1979 Iranian Revolution, where many members were executed, imprisoned and tortured. Nevertheless the Union still exists until today and has a long and proud history of promoting women’s rights, equality, justice, and democracy.

The second most important legacy of the Republic consists in the unwavering commitment to democratic national liberation by Qazi Muhammad, who as a nationalist figure and leader, served to provide a model of selfless and patriotic love for the nation. Qazi Muhammad founded the Kurdish Democratic Party of Iran (PDKI), which endures until today. In 1947, almost a year to the founding of the Republic, the Soviet Union withdrew from Iran, resulting in the Republic being violently crushed, and many of its leaders exiled, executed, and imprisoned. Qazi Muhammad was hanged in ChwarChra Square (Kurdish Meydani Cuwarcira), at the heart of the city of Mahabad on the 30th of March, 1947. Qazi Muhammad’s powerful last words to his people is a reminder of the notion that although people or leaders may be executed, ideas, freedom and hope for liberation can never be extinguished. In his own words:

“Ultimately, you are achieving nothing. I am dying for the freedom of my people and I am proud of this honorable death. Even at the moment when my body hangs from the rope, my shoes are above my enemies head.”

His legacy has resulted in other Kurdish leaders suffering torture or imprisonment for their people such as the likes of Layla Zana, Selahattin Demirtaş, Sakine Cansiz and Abdullah Ocalan.

But more than that, Qazi Muhammad presented a manifesto to the people of the Republic that involved the following key policies:

This social contract highlights the democratic and progressive nature of the Republic as envisioned by Qazi Muhammad. A Kurdish nation, whatever form or shape it may take, will be unabashedly democratic, progressive, and multicultural in nature. Had The Republic of Mahabad endured, it would certainly would have had a strong influence on neighboring regions in relation to its progressive values. Indeed, its legacy is still present in the current “Jina” uprising in many forms.

Nevertheless, Qazi Muhammad’s legacy and execution also attests the need for the Kurds to rely on their own people and promote unity instead of relying on external powers. The Republic eventually became a pawn for regional power struggles between the West, including America and Britain, that of the Iranian regime itself, and the USSR. Though the Republic is often labeled a “puppet” state of the Soviet Union, it proved itself to be far more than this reductive and rudimentary label indicates. The withdrawal of the USSR following its own national and regional interests resulted in the collapse of the Republic and the execution of thousands of Kurds for the decades to come until the 1979 revolution. Soon after the establishment of the ideology of velayat-e faqih (guardianship of the jurist), the new Islamic Republic of Iran’s leader Ruhollah Khomeini issued a fatwa on the 18th of August labeling the Kurds as heretics and non-believers and authorizing a massacre against them. The religious edict authorized the newly established Islamic Revolutionary Guards Corps (Sepah-e Pasdaran) to march into occupied regions of Eastern Kurdistan with tanks, a large military force, and cannons against defenseless and unarmed Kurdish civilians. Consequently, more than 10,000 people were slaughtered including at least 1,200 political prisoners. In the current “Jina” uprising, there has been a disproportionate level of violence and military force imposed on the Kurdish cities, and fellow oppressed nations such as the Baloch.

The above example brings home the tragedy of the Kurdish people’s oppression and their constant betrayal by international powers and use of their nationalist aspirations for regional and hegemonic aspirations of powerful states. Though the very nature of the colonially constructed and imposed borders on Kurdistan has imposed and entrenched further divisions, it is up to the Kurds to do the work of unlearning and decolonizing their minds and psyches from the negative influences of these violent borders. The example of Rojava’s Democratic Confederalism perhaps can serve as an example of autonomous regions that practice self-rule and retain a degree of control over Kurdish affairs. If not, there are other examples, including the protected, autonomous zone of Southern Kurdistan (Basur, northern Iraq), that would also serve as an example.

Though the above legacies are by no means a comprehensive list of the long-term effect and impact of the Republic of Mahabad and the revolutionary leadership of Qazi Muhammad, it is clear that the example of Mahabad still lives vividly and powerfully in the collective memory and aspirations of the Kurds. Mahabad has served to provide a collective and unifying consciousness and example of liberation for the Kurds, as it is indeed one of the examples that serves to unify a still deeply divided people. Unlike the unifying myth of Kawa the Blacksmith that underpins the mythology of Newroz, Mahabad is no myth, no mere imaginary figment of a people long oppressed, divided, conquered, and terrorized. A people whose language, culture and identity has been outlawed and denied at best and stolen and appropriated at worst. The fate of the Kurds in the era of a global pandemic, violent globalization, oppressive borders, and the rise of neo-nationalism across even the most so called democratic nations remains uncertain. Yet, no one can take away the awe inspiring example of Mahabad and Qazi Muhammad from us.